JoatU has gotten a much needed face-lift and some incredibly fresh ruby on rails code to match!

So check out JoatU.org and request your invite to join! 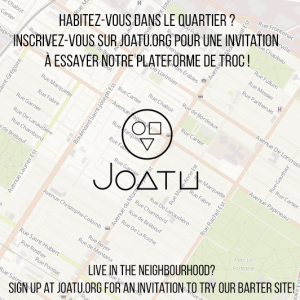 Wherever you are in the world, it’s never too early to request an invite to JoatU!

Since launching a crowdfunding campaign and travelling from Montreal to BC to California and across to New Orleans, I have learned a lot about how JoatU is perceived across a variety of cities, towns, villages and communities.  We have found new allies in specific locations including Toronto, Regina, Kamloops, Vancouver, San Francisco and New Orleans.  And we have picked up new talent onto our team with experience working with Couchsurfing.org.  After two months on the road and across two vast countries we have learned so much that will help JoatU flourish in the long-term.

However, our focus on building one-on-one relationships meant that the campaign necessary to reach the masses were not organized in the way they needed to be. share my thoughts as to why exactly I believe this has happened, following up with what we plan to do about it. Our original goal was to raise $25,000, but at this pace, our original goal is now unrealistic.

I would like to  share my thoughts with you as to why this has happened, and  what we plan to do about it.

1)     JoatU Alpha isn’t built yet. Soliciting funding for a broad software project is ambitious.  Moreoever, we do not havea public test version to convince potential backers/donors/ supporters .  For example, Loomio was able to raise over $100,000 after having thousands of people and organizations test their initial release.  Their software was built, tested, and learned by a strong community of team members, who then went out and  raised what they needed to take it to the next level.

2)     We need to focus our marketing.  Who is JoatU going to be good for?  Is it for freelancers?  Yes.  Retired people?  Absolutely.  Semi-retired?  Them too.  Students?  If they have time.  So, JoatU is for everyone?  Potentially.  This is a huge strength when you look at our potential growth and a huge failure when you try to market it like that.  JoatU is a broad concept that has plenty of potential applications and can apply to nearly everyone…one day.  For today, that’s too much.  Even if your product is for everyone, not choosing to narrow in on a specific segment is shooting yourself in the foot.  Who do you want your primary adopters to be?  Now market to them.  I see community organizations as the greatest initial beneficiaries of JoatU, so now that I’m back in Montreal, they’ll be our first stop.

3)     How does JoatU stack up against other resource-sharing sites?  JoatU is more easily explained in context. When I present JoatU to  many different groups with a wide variety of experiences and educations, you get incredibly varied perspectives.  The animated video does a great job of explaining how JoatU works, but for someone to wrap their mind around the idea of ‘what JoatU is’ or to imagine how it could facilitate their lives is a whole other level.

For a list of free-association first responses to my explanation of JoatU, see: Craigslist, Marxism, Socialism, Couchsurfing, timebanks, Kibbutzes.

4) Execution is everything.  We think our spin on this concept is amazing, but our success or failure depends on the execution.  We have received many valid inputs about how to go about doing this. Each person imagines a different form of execution.  The optimist sees a lot, the realist a bit less, and the pessimist, that it won’t work at all.

After speaking with one of the founders of IndieGogo, Danae Ringelmann in Montreal about crowdfunding, she told me one thing that really stuck.  For the first year of Indiegogo, crowdfunding was a novel concept, and all she did was educate people on what crowdfunding was.  Not how great Indiegogo was or all of its capabilities.  Just ‘Crowdfunding 101’.

So our goal is to boil the sharing economy concept down to its core and promote social capital (as compared to financial capital) and JoatU as a means for people to build that social capital.

“Social Capital is the expected collective or economic benefits derived from the preferential treatment and cooperation between individuals and groups.” – Wikipedia

5)     So why Crowdfund to Crowdsource?!? P2P (peer-to-peer) systems have been an interest of mine for as long as I’ve known about them (about 12 years).  I love the concept of collective collaboration.  However, in my mind, I might actually be living a few years into the future where bleeding edge concepts are only cutting edge concepts.  My idea in allowing the crowdfunders the opportunity to be a part of the process in allocating the funds itself to get JoatU built was in allowing for a horizontal ownership of responsibility throughout the organization.  With JoatU, I am trying to generate a ‘do-it-yourself’ economic platform for communities, so why should I have all the fun in shaping it?  I wanted to crowdfund the money and then pool the knowledge of the funders to help determine the best use for the money.  I wanted the people donating to the cause to become a part of the process itself.

While this has a lot of potential, ceding this much control without having a more complete structure of organization leaves too much in the air and isn’t easy enough for contributors to latch onto. Given my central role to the project, it is all the more apparent that I must steer the ship until I have confidence in a team of people with whom I have complete confidence. If I don’t build a proper foundation for the team to work from, the project’s capacity for change can overwhelm the group.  The foundation needs a strong ground floor to stand on.

We are still going to be using a loomio for the funders who have paid for that perk however and it is still available if you’d like to be a part of this group!

5)     $25,000? Call it ambition.  Call it chutzpah.  Call it foolishness.  Call it whatever you want.  A variety of programmers/organizations have given me different figures to work from to have a functional version of JoatU built.  This seemed like a realistic figure to cover the costs of development.  But without any testing grounds; without simple versions to work from, we can’t know what we should be changing to suit the needs of the users.  Asking friends, family, and the general public to fund an untested project to the tune of $25,000 might have been too much to ask for right off the bat.

6)     Cross-country Awareness & Crowdfunding Campaign is an enormous project in it’s own rite. We had about 20 people throw their hat into the JoatU ring to help put together this crowdfunding campaign.  Unfortunately, as CEO, Human Resource Manager & Customer Relations all wrapped into one, I sometimes forget which hat I’m wearing at a given time.  Until I can find part-time volunteers willing to dedicate 10 hours/week to JoatU towards a role and not just a specific task, I’ll have to keep wearing all the hats and remain vigilant in keeping an online presence running during the campaign itself at all times.  In other words, for any campaigns, I have to dedicate myself to be online just about all day every day. 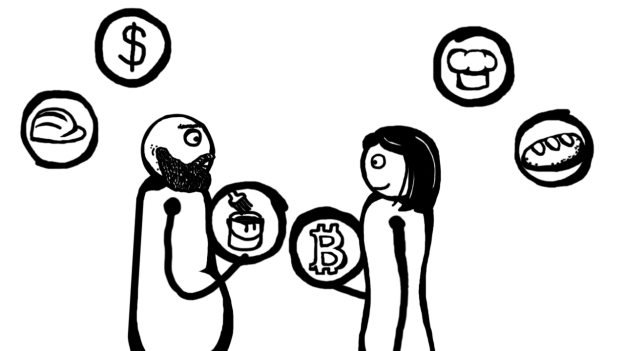 1)     JoatU Alpha is currently being built in Ruby! Since the launch of the campaign, all it took was one particularly friend (thanks Bobby!) sharing it on his wall and *poof* we hook a talented programmer who was an early developer of Couchsurfing (the online sharing economy innovator).

2)     JoatU’s marketing will develop focus.  It’s important to acknowledge that we can’t go after everyone all at once.  It’s time to go after the people that want to be using JoatU right away.  Social progressives, local vegetable growers & producers, talented freelancers, the DIY community and part-time skilled trades.

3)     Food brings people together.  Going after a full supply chain and getting them hooked into a local JoatU community could be an incredible starting point for the organization.  If we can find a farmer, supplier, and distributor all willing to join the system, we could easily provide supplementary vegetables to a very local community in exchange for community involvement.

4)     Local is everything.  JoatU’s goal is to focus incredibly locally so that we can more efficiently make trades within our communities.  While our search for developers and volunteers is global, it seems like an appropriate time to focus in on a small area (5×5 square blocks or less) in Montreal as a test market so that we can more quickly determine the needs of our users.

5)     Organize it and they will come.  We need to keep developing JoatU’s organizational strategy before we can expect too many people to jump on board.  As much as I want a horizontal organization, we need to build adequate structure for those interested to properly latch onto.  Everyone is welcome to contribute, but we will not be waiting until we’ve already developed a team to build better organization, we need to be able to better accommodate volunteers now.

6)     $5000 can foot the bill for an alpha launch.  With new talent on board willing to help develop for very low pay, we can create a barebones version of JoatU with very limited features for $5000.  While this wasn’t an option when we initially launched asking for $25,000, it is now a possibility.

One of the greatest strengths of an open-source project is its capability to adapt to changing situations.  After careful consideration, a new cost assessment and a barebones alpha approach, we have decided to come back to the community with a counter-offer; Help us raise $5000 this time so that we can prove ourselves to you with a simplistic alpha prototype.  Once you try that out and like it, when we launch our next campaign, help us raise more to get it done in full.

Just to note, if any of our current funders are unhappy with this decision and want their money returned, please contact us and you will be refunded.

7)     Extended time-frame for full-time online dedication. Traveling, meeting people, and planting the seed of JoatU across Canada and the US is both an incredible experience and opportunity (I’ve given out upwards of 400 booklets).  Unfortunately this isn’t what an online crowdfunding campaign needs to be successful.  That’s why we’re extending the campaign significantly so that when I get back to being online 24/7, there will be full-time dedication to help us raise the funds necessary to feed developers.

The Jack of all trades Universe is an online community marketplace – a space where members can exchange any type of value that they can imagine. Members can use their skills to grow, build, or create anything they want to trade, rent or sell within their personally-defined community boundaries.

JoatU and it’s growing number of users are laying down a foundation for the development of the decentralized open-sourced world.

The non-profit’s goal is to bring currency generation and local exchange to communities everywhere.

JoatU allows people to literally create their own jobs.  “By 2020, more than 40 percent of the American workforce, or 60 million people, will be freelancers, contractors and temp workers…”¹ The benefits to individuals cannot be understated.

When a member makes an offer that is beneficial to the community, currency is generated to pay the individual for their service by the JoatU currency generator.  But it is up to the communities to decide what offers they will and will not support.

By creating currency to fund offers that benefit the community, the entire community can directly address its own needs through JoatU service offers. JoatU will enrich the quality of our very lives.